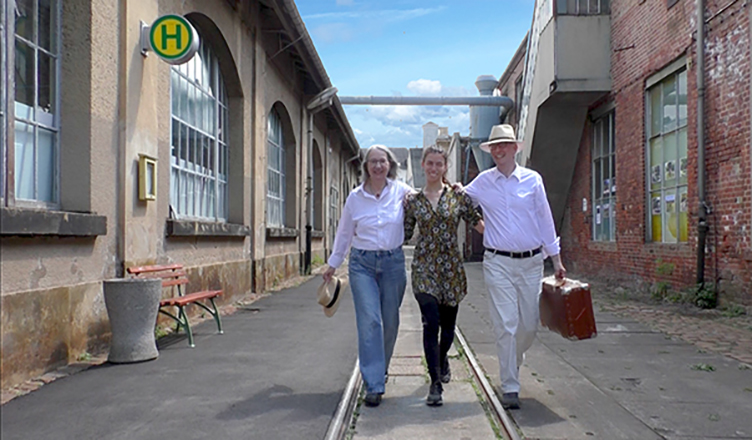 Our micro-project Entangelments. Language of Angels. Gestures as mediators between cultures had accompanied us for more than a year. Three female artists and one male artist worked together and did their own thing. Poetry, essays, art-scientific texts and miscellanies on the intertwined themes of angels and gestures were produced and can still be read on our website. The dance workshop on the theme of gestures took place on the Garage Campus and the invitation to participate in our photo challenge went out to 140 cities worldwide.

Presentations from the artists workshops

As part of „Garage öffne dich“ we were able to show some out of the artist’s workshop on the Garage Campus. Selected photos from the international Foto Challenge submissions found their place here, as did Marlen Wagner’s photo series This is not a pointing gesture. Both exhibitions will be there for a while. Libertad Esmeralda Iocco awakened an abandoned place with her Blue Movement and filled out the large hall with her dance performance The Afternoon of an Infinite Day and Robert Krokowski explored the Garage Campus during a Photo Session and advised Makers united participants and other interested parties in his mobile Business Angel Office.
We would like to thank all participants of the Photo Challenge for their entries. We also would like to thank the Garage Campus for their uncomplicated hospitality and the Capital of Culture Office for their renewed financial support!

On to new projects …

Our first project with the focus on gestures within the framework of the Letters of Angels towards the Capital of Culture 2025 has thus come to an end. But the Letters of Angels will continue to accompany us. For 2023, we are planning a new project that will focus on scripture. We would also like to carry out this project again with and in Chemnitz. We will report on the status of the planning on our website.

This much can be revealed in advance: The Letters of Angels, like any written language, has many words, but unlike all other languages, these words have no meaning. Over a period of more than 20 years, many people have worked on giving meaning to many of the words. Everyone can contribute to this, regardless of their own mother tongue. It is not a matter of translating from one language to another, but of finding and inventing together the meanings of the Letters of Angels. We will again call for participation worldwide – in the creation of a glossary and work locally in Chemnitz in workshops with interested people of any age from Chemnitz.